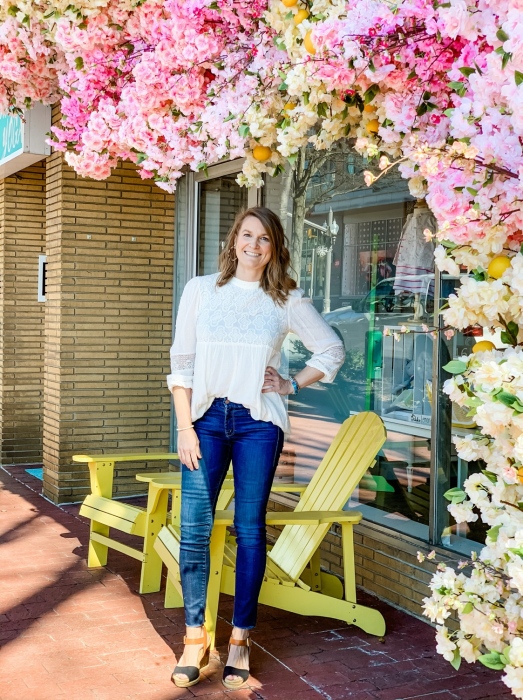 Erin Jean Messner, 40, of Falls Church, VA, passed away in her home on Monday, March 7th , 2022 in the presence of her mother, husband, and children, and surrounded by the love of so many others.  She waited for her children to come home from school on that day so she could be close to them one more time before she let go.  Erin’s life journey was cut short by colon cancer but her spirit lives on in the memory of her bright smile and infectious personality.

Erin Jean Warfield, daughter of James M. Warfield of Germantown, MD and Margaret A. Warfield (Pauls) of Gaithersburg, MD was born October 24th, 1981, in Washington D.C.  She attended Whetstone Elementary and Montgomery Village Middle schools and graduated from Watkins Mill High School in 1999.  Following High School, Erin went on to attend East Carolina University in Greenville, NC, earning her Bachelor of Science in Business Administration with a focus in Marketing in December of 2003.  Erin was a member of the Alpha Phi Sorority where she became lifelong friends with many talented and inspirational women.

After graduating from ECU, Erin moved back to the Washington D.C. area and began working for Technical Analysis Center, a company supporting the Peace Corps in their downtown office.  Erin gained her security clearance in 2004 and transitioned to supporting the Director, Operational Test and Evaluation (DOT&E) inside of the Office of the Secretary of Defense at the Pentagon.  It was while working at the Pentagon that she met her future husband, Joshua.  Erin quickly mastered her job at DOT&E and after two years, was ready to challenge herself with a career in Marketing.  In January 2006, Erin joined Investor Place Media in Rockville, MD, as a Marketing Associate and shortly after was promoted to Marketing Manager.  Erin spent a short time with 1105 Media in Falls Church before becoming a self-employed Marketing Consultant in 2010.  No matter where she was employed or what her job, Erin was a highly regarded employee and cherished colleague.

Erin grew up in a very loving family that provided her a constant source of support and comfort. Though four years younger, her brother Patrick is like a twin they are so much alike.  Her mother was at her side through the darkest days of her battle with cancer.  She appreciated her father’s help with opening her store and his regular phone calls, and the enjoyable visits from her brother Marc.  Throughout her life she shared a special bond with her aunts, uncles, and cousins.  Family gatherings are always awash in a warm and welcoming feeling, full of loud cheerful voices and laughter, and none louder than Erin’s.

Erin and Josh were married on a splendid day, September the 20th 2008.  The wedding was held on her aunt and uncle’s farm near Adamstown, MD, and is remembered by all who attended as being the most fun wedding ever- it was Erin’s wedding after all!  They bought a house in Falls Church in 2008 and welcomed their son, Benjamin, in the Summer of 2012 and their daughter, Emma, in the Spring of 2014.  Erin made the choice to stay at home with her babies but was a stay-at-home mom in title only.  She was always on the go with her children, meeting people and staying active in her children’s preschool education.  Erin served as the Fundraising Chair and then President of the Dulin Cooperative Preschool in Falls Church between 2015 and 2017.

In early 2017, Erin set out on her most ambitious enterprise yet- Lemon Lane Consignment, LLC, a children’s clothing consignment store in Falls Church.  From the first time Erin spoke to anyone (including her husband) about opening a store, until opening weekend, was a mere 6 weeks.  It was a grand adventure for Erin and the small group of friends that helped her turn her dream into a reality.  Lemon Lane continued to thrive even through the pandemic, and her beautiful store front has become a fixture of “The Little City”.  Through Lemon Lane, Erin has employed and mentored several amazing young high school and college age women that will undoubtedly go on to be successful leaders.  Erin met so many wonderful people through Lemon Lane, and being a part of that community brought her so much joy.  She also shared her woman owned small business influence as a member of the Falls Church Economic Development Authority and Chamber of Commerce.

Erin had a magnetic personality that could be felt from across a room and she attracted anyone that resonated with her energy.  Her heart shaped every arc of her life journey and she couldn’t be anything but genuine.  She had many, many good friendships and a few that were as deep and vast as an ocean.  She was a smart and savvy business woman, a badass boss, a cherished daughter, a one of a kind sister, a loving mother, a great life partner, and a treasured friend.  Erin was intelligent, decisive, fun, cool, sexy, and in a word, unforgettable.

Erin’s family would like to thank the small army of friends and extended family that supported them during these very difficult 15 months.  Your caring words and generosity have helped us to endure this most trying time.  Josh would like to acknowledge the tremendous support he has received from his office and his co-workers in the Department of Defense.  They have given him the most valuable gift of all, the gift of time.  Time to be a husband, father, and care giver.

Erin is preceded in death by her grandparents, Gustav and Jean Pauls, and James and Janice Warfield.  She is survived by her husband, Joshua; children, Ben and Emma; her mother, Margaret Warfield; her father and stepmother, James and Lisa Warfield; brothers, Patrick (René) Warfield and Marc (Jessie) Warfield and several nieces and nephews.

There will be a Family and Friends gathering at 7:00pm on Friday, March 18th at Peace Lutheran Church, 6362 Lincolnia Rd, Alexandria, VA.  Anyone who was a friend of Erin’s is welcome to come and share memories.  Dress is casual and masks will be optional.  Children are welcome.

Memorial Services will be held at 4:00 pm on Saturday, March 19th at Peace Lutheran Church, 6362 Lincolnia Rd, Alexandria, VA.  Children are welcome.  Masks will be optional. The memorial will be live streamed on the Peace Lutheran Church Website.  There will be a link to click on the main page.  https://sharingpeace.org/

There will be a celebration of life following the funeral service at Claire and Don’s Beach Shack 130 N Washington St, Falls Church, VA 22046 (food will be catered)