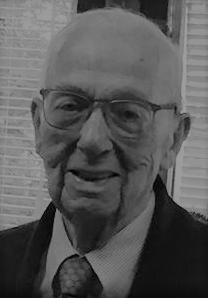 William (Bill) Reid Johnson, 93, of Arlington, Va., passed away on August 5th after a short illness.

At the age of 26, Bill married Norma (Owen) Johnson of Kansas, and went on to have 3 children and 1 grandchild.  He enjoyed dancing,  sailing, traveling, painting, and gardening.

He is survived by his wife Norma and his children, Janice Johnson, Linda (Robin) Pettit and  their son Tony, and Douglas (Ann) Johnson. Bill is survived by his sister Mary Virginia Johnson of Colorado and his nieces and nephews. He is predeceased by his parents, and sister Miriam.

Bill suffered from macular degeneration, a leading cause of blindness,  and memorial donations may be made in his honor to the Wilmer Eye Institute at Johns Hopkins (https://www.hopkinsmedicine.org/wilmer/charitable-giving ).  A celebration of life will occur at a future date.