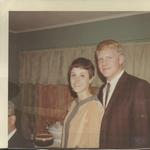 On Monday, April 7, 2014, Suzanne (Susan) Hunt Harper succumbed to a variety of factors after a long battle with Multiple Sclerosis. Loving husband of almost 46 years, Howard, and son Jonathan, were at her side. Her other two sons, Daniel of Florida and Timothy of
Richmond joined them later that week.

She was a faithful wife of 45 years and ten months, traveling around the world in support of her husband's career, raising three boys, many times by herself. Suzanne gave countless hours to Army Community Services (ACS) welcoming newly arriving Army families, helping as they lived there and as they outprocessed. She wrote/edited their newsletters, worked in their loan closets, and handled visitor-bureau type duties for surrounding communities, schools, stores, etc. As the children grew older, she volunteered in Army and local school
libraries, became a scout den mother and soccer Mom, basketball Mom, T-ball Mom, and swim Mom, as well as PTA member. In her "waiting time" she began doing excellent needlepoint pictures. Many were given as gifts, many others decorate the home, and are usually first mistaken as paintings by casual visitors.

Additional challenges for Suzanne: In 1969 Suzanne arrived alone in Germany 6 months pregnant, was picked up by her husband and driven to her new residence in Wuerzburg, Germany. Two hours later he was called out on a military alert to emergency deployment positions for a five-day military exercise, though the duration was unknown at the time of alert. Welcome to Germany. Many of these followed but the first was by far the most traumatic. Three years later with husband in Viet Nam, one child to care for, and pregnant with the second, she wrote daily letters to Viet Nam. After five months or so, for several weeks they were returned as undeliverable, causing her to think the worst. The
administrative problem was finally resolved and letters started flowing both ways again.

Years later, an assignment to Iran seemed a wonderful chance to experience the grandness and culture of Persia, and a wonderful alternative to another tour in Germany. It was just that, until the revolution. In April 1978 the unrest became apparent -chanting crowds and signal fires in the mountains at night. In May, someone painted graffiti in black paint on our yellow car. The words were so vile, neighbors wouldn't even translate them for us. In September they declared Martial Law after the evening crowds got more rowdy. The kids had to lie on the school bus floor while traveling to and from school, they had armed guards. A picture of a crowd of protestors in front of a bus at their school made the cover of one of the two major U.S. weekly news magazines in September 1978, alerting all friends and family at home to the seriousness of our situation. After months of asking for safe passage for U.S. families to leave Iran, we got a call one night in early December. Wives and children should meet at 7:30 the next morning with one suitcase for each for an escorted, armed bus trip to the airport .-Name a further destination when you arrive in Greece. Off
she went with four suitcases, three boys under the age of ten, with one (early) Christmas toy each to get on an Air Force C-130 Cargo plane for a 2500 mile trip on the first leg of an uncharted return to Cleveland, Ohio, over 24 hours of flying away. At the end of which, she had to move into her parents two spare bedrooms, re-register kids in school, etc. etc., and buy new clothes for all four of them. And the nightly news was filled with scenes of husband/father in a far-away place with demonstrations, riots, fires, cries of "Yanqii go home" and "Death to America" resonating everywhere. Another tough situation for a Mom.

Faith, prayer, dedication, determination, drive, motivation, love, perseverance, - all practiced and tested to some degree in her life up to then, were necessary to pull her and the boys through the next three and a half months, again not knowing ahead of time the required duration which makes it all even harder. Rest in peace sweetheart, you deserve it.

Over the last 30 years as her eyesight, dexterity, balance, and mobility lessened she insisted it was not a handicap, but an "inconvenience". Her sharp wit, great sense of humor, and giving/loving demeanor will be missed by many.

She was preceded by a baby Brother and her Mother and Father. Survivors include a Brother James in Washington, Brother Jesse in New York, Sister Noel in South Carolina, and Stepmother Dorothy in Ohio.

Cremation was in Chantilly, Virginia, burial is pending, planned for Arlington National Cemetery.