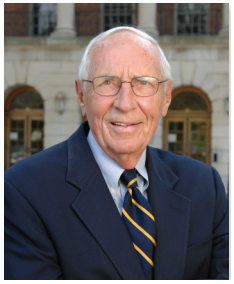 Robert Bruce Wallace, MD, passed away at his home in Alexandria, VA on August 23, 2022 surrounded by family.  Bob was born on April 12, 1931, in Washington, DC to William and Anne Wallace.  He graduated from Columbia College in 1953 and Columbia College of Physicians and Surgeons in 1957.  After a surgical residency and internship at St. Vincent’s Hospital in New York, he received additional training in cardiothoracic surgery at Baylor College of Medicine in Houston, TX under Drs. Michael DeBakey and Denton Cooley.  Following a cardiac surgery fellowship with Dr. John Kirklin at the Mayo Clinic in Rochester, MN, he joined the staff in 1964 and in 1968, at the age of 37, he was appointed Chairman of the Department of Surgery.  He served as Professor of Surgery at the Mayo Medical School, was a member of both the Board of Governors of the Mayo Clinic and the Board of Trustees of the Mayo Foundation.

Seeking a new challenge and a desire to be closer to family, Bob returned to Washington in 1980 as Professor at Georgetown University School of Medicine and Chief of Surgery.  He was elected President of the American Association of Thoracic Surgeons in 1994.

Upon retirement, Bob continued to contribute to the medical community serving on various boards.  He collaborated with a former patient in founding the LeDucq Foundation, the largest cardiovascular research foundation in the world, and served as Chair of their Scientific Advisory Committee. He also served as an advisor to the Culmore Clinic, a non-profit healthcare clinic serving low-income adults, The Cathedral Choral Society and Goodwin House.  In addition to the hundreds of medical students and residents he taught, Bob tutored and mentored inner city school students.  He also found the time to become an avid golfer, discovered the world of waterfowl carving, traveled and relished his time at the Outer Banks with friends and family.

While proud of his professional accomplishments, nothing was more important than family.  Bob is survived by his wife of 67 years, Betty, his children Rob, Anne Sprague, Barb (Paul) Schwartz, and his grandchildren, Tyler, Kate, Charlie, Ellie, Maggie and Jack, and brothers William (Sallie) and Hank (Carol), many cousins, nieces and nephews.