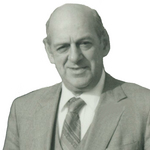 Passed peacefully at home surrounded by family. Served as an officer in 47th Engineers Battalion during World War II. Devoted 34 years as an engineer for the US Forest Service with the last 12 as Chief Engineer. Member and past president of the Nation's Capital American Society of Civil Engineers and member of their History and Heritage Committee, past president of McLean Post #270 American Legion, past president of Virginia Canals and Navigations Society. Member of Great Falls and McLean Historical Societies and Ladybird Johnson's Committee on Highway Beautification. He received numerous awards and accolades for his engineering work.