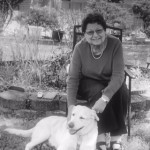 Maria Nowak Andrade (Mitzi), a long time resident of Alexandria, Virginia died on Monday, the 9th of April at the age of 79.

Maria was born on April 3, 1939 in SA�mperk, Czechoslovakia, growing up in the neighboring town of NA�kle. At the age of 14, she moved to Hombressen, Germany, where she graduated high school and then attended college to pursue studies in accounting. Her proudest moment ever though, will always be the day she became a first-generation American citizen, October 6, 1965 in Baltimore, MD, after coming to America by boat, in 1962! Maria retired from Suntrust Bank in 2008 after 24 years of service.

She loved to volunteer and spent time helping others through the March of Dimes, the Humane Society and the ASPCA. She also loved sewing and knitting, reading and going to the beach. Her greatest love was always German Shepard's.

Maria was preceded in death by her grandparents Josef NovA�k Sr. and wife Anna NovA�k., parents Josef NovA�k Jr. and wife Maria Osladilova NovA�k Rheinisch, Uncle Frank NovA�k, Aunts Waltraud Felkel and Gerti (Gertrude) Schindler and step-father Helmut Rheinisch. She is survived by husband Orlando Jose Andrade Jr. to whom she has been married to for 48 years (October 16, 1970) and Son Michael James Mosher, both of Virginia, and daughter Olga Maria Andrade of Louisiana.

In keeping with the wishes of Maria, there will be no services.

In lieu of flowers, a donation to The Humane Society, in her name, will be appreciated.